This year for Halloween, a few of us attempted the popular Pumpktris instructable. Pumpktris is a version of Tetris playable in a pumpkin 🙂 Nathan Pryor (HaHaBird) created it. Here is his version in all its glory. It got a lot of interest, from other instructables to local news coverage to BoingBoing. Nathan also made an ACLU Amazon Dash button (repo).

We got all the electronics working, from the program loaded to an Arduino Uno, both soldered LED matrices, and controller. We even got the pumpkin stem handle on the controller and all the LED holes driled and cut. Unfortunately, we were unable to mount the LED matrices into the pumpkin itself. I believe this was due to a combination of the thick walls of the pumpkin we chose, and our sub-par soldering job. Pressing the LEDs into the pumpkin became painful, both literally and figuratively 😛

Here is an updated version of the Pumpktris program, which includes smoother left/right movement. You can hold left/right down on the joystick to move instead of using discrete movement events.

Here is a modded version of Adafruit’s 8×8 LED matrix testing program for testing 2 side-by-side matrices. It turns on every single LED so you can easily test if you wired your head correctly. After downloading Adafruit LED backpack library and loading it into your Arduino IDE, you can drop this program into the library examples folder for easy access later.

Some pictures of our attempt: 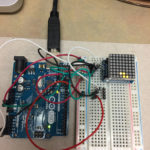 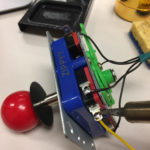 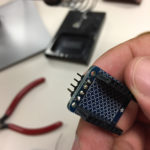 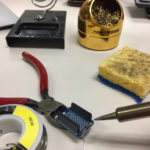 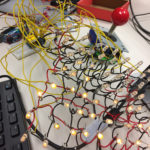 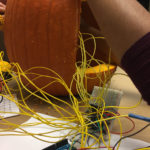 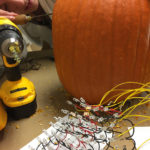 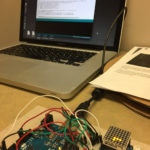